ABOUT THE RYBURN CUP

The Ryburn Cup was dontated by Wynn Ryburn to honour her husband, Bruce, who was a dedicated longterm member of the Clevedon Tennis Club. This friendly Tournament is played annually and is a great opportunity to meet and play with other members of the Club.  Any level of play Member of CTC can enter over the age of 18 yrs.

Fabulous fun at the Ryburn Cup Tournament today.  Congratulations to our 2020 winner who is SUSAN QUARRIE  and to our Runner-up, Steve Mason.  Thanks to all for attending this special Tournament and to Betsy Stott for running the event!!

The 30th anniversary Ryburn Cup tournament was a fun, albeit windy, day! There was a good turn out of players and our Patron, Hilda Cunningham, attended to ring the bell and award the winner.

BERNISE MILLIKEN is our 2018 Champion with Nicky Auld placing as Runner-up.

Thank you to Club Captain, Mark Chamberlin and Steve Michell for organising the event.

RYBURN CUP 2015
We could not have asked for a more beautiful day for our 2015 Ryburn Cup Xmas Tournament!
Players enjoyed Christmas music while they played a fun round of tennis, swapping partners after each game to 40 points.  The families then joined us after the prize giving to demolish a pile of delicious bacon baps and rudolph cupcakes.

STEVE MICHELL is our 2015 champion and his name will be going on the trophy!
Well done, Steve.

RYBURN CUP 2014
Club members and their families enjoyed a great day of tennis during our annual Ryburn Cup event in November 2014.  A Xmas theme was added to the event with music, decorations and some players dressing for the occasion!

JANE JAMES has the honour of being our 2014 winner!  Congrats Jane!

(See our gallery for photos of this fun day) 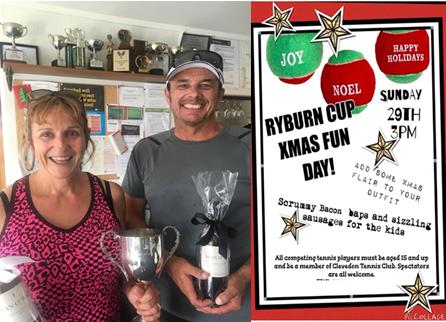